Czechoslovak airmen
in the RAF, natives
from Pilsen – Karlov

Czechoslovak airmen in the RAF, natives from Pilsen – Karlov

We realised our project commemoration of this airmen in year 2018. We unveiled a monument dedicated to them.

Oldřich Hořejší was born on 21 June 1912 on Škvrňanská třída number 15. His father was Josef Hořejší, a machinist from Scher, and his mother Filomena Malá from Předslava. He graduated from business school and worked as a law clerk for some time. He graduated from the School for aviation officers in reserve, the Military Academy in Hranice and an applied course for Air Force lieutenants. He left the country in July of 1939. In France, he was transferred to a bomber squad, but did not participate in any battles. He sailed for Great Britain in June, where he was admitted into the RAF. He began flying operationally in the No. 311 Czechoslovak Bomber Squadron on 7 December 1941, with which he undertook dozens of raids in occupied Europe and patrol flights over the ocean. He returned to liberated Czechoslovakia on 2 September 1945 with Karolina Lucy Day, whom he married in 1946. In 1948, he went back to Great Britain due to the communist persecution, where he joined the RAF again. He died on 22 April 1982.

He was born in Pilsen on 20 October 1916, to Václav Peroutka and Maria Peroutka, (maiden name Švamberk). After finishing his basic education, he completed vocational training to become a barber. In 1934 and 1935, thanks to training in the “1000 new pilots of the Republic” programme, he obtained a pilot license. In 1936 he graduated from the NCO school and in 1937 he continued at the school in Prostějov as well as at the School for fighter pilots in Hradec Králové. In 1939, he left for France. He participated in battles with the GC II / 3 fighter squadron and shot down two German aircraft. After the fall of France, he sailed to Great Britain, where he became an airman in the No. 312 (Czechoslovak) fighter squadron. In May, 1942 he married Catherine Sutherland McCullagh. On 1 June 1942, the couple had two daughters – Marie and Charlotte Sutherland. Unfortunately both died a few days after birth. In October of the same year, Stanislav was relocated to Exeter Airport, where he became an air traffic controller, and later to the No. 310 Squadron, where he flew to the end of the war, apart from some breaks. The couple returned home to Pilsen on 7 December 1945. Stanislav also returned to the West Bohemian Aeroclub, where he worked as a flight instructor, but only until 1948 or 1949, when he again went into exile, to the hometown of his wife, Ayr, Scotland. He worked as an accountant for some time there. He died on 17 April 2000 in Kilmarmock.

He was born on 18 October 1911 as Miroslav Josef to Václav Petr and Barbora Petr (maiden name Šmídlová) in Pilsen, at Škoda House No. 1267. He attended vocational training as a machine fitter. In 1931 he obtained a pilot license at the West Bohemian Aeroclub and on 1 October 1933, he began military service at Aviation Regiment 1. In September 1938, he took part in the mobilization. He reached France via Poland, Romania and the Middle East, but he did not participate in any battles and left France after its fall. After a year of training, he became a member of the No. 310 (Czechoslovak) fighter squadron He participated in defensive and offensive actions until 29 January 1943, when he did not return from a battle with German fighters near Morlaix, where he had accompanied bombers to. Up until that day, he had flown a total of 169.5 operating hours and participated in 27 operations. In the United Kingdom, he got engaged to a Miss Mary Palmer.

He is commemorated at the Memorial of the Fallen Airmen of the West Bohemian Aeroclub in Pilsen, the Memorial to the Fallen RAF Airmen in Prague-Dejvíce and on the Cenotaph in Škvrňany.

He was born on 29 September 1914 in Pilsen, to Karl Pošt, a Škoda worker and Maria Pošt (maiden name Tumpachová) of Mirošov. He completed vocational training as a mechanic. He started flying in the West Bohemian Aeroclub, he continued at the Junior Air Force School in Prostějov. He completed his military attendance service with the Aviation Regiment l, with which he also underwent mobilization. He set off to join the resistance through Poland. In France, from May, 1940, he joined the fighting with the 4th Escadrille Groupe de Chasse II / 4 fighter squadron. There, he shot down two aircraft in cooperation. In September 1940 he became a member of the No. 312 (Czechoslovak) RAF fighter squadron. On 21 September 1942, he married Gladys Idou Cashmore in Plymouth. In November of 1944 he became commander of Squadron A. He concluded with operations in February 1945 with a score of 3 aircraft in cooperation, 2 damaged. In Czechoslovakia he was the flight commander of the Aviation Regiment 4 and several school squadrons over time. In 1948, he was discharged from the Air Force. He sent his wife and daughter to Great Britain, later joining them. He re-entered the RAF there. After leaving the army he was widowed, but married again later. In the town of Kingskerwel, he opened the Seven Stars Inn. On 8 January 1961 he died of a heart attack.

He was born in Pilsen on 25 May 1919 to Karl and Berta Schwarz, (maiden name Jirová). He joined the “1000 Pilots of the Republic” programme and received a pilot license in 1938. At that time, he wanted to volunteer to join the Czechoslovak army. In 1939, his father reported him missing, but he was already on his way to France. As a training pilot, he went through several air bases but did not participate in combat. He reached Great Britain via Africa on 16 July 1940.

He began flying with the RAF in the 56th Operational Training Unit. On 22 September 1941, his plane crashed near the village of Wiggenhall St. Peter. Both the wreck and the dead pilot were recovered after six days. The body of Jiří Schwarz was buried on 2 October 1941.

He was born on 31 May 1914 to Theodore and Božena Soukup (maiden name Puchtová). He completed vocational training as a turning machine operator. He and his parents lived for a while at Na Pomezí 1 and later in Mosazné 3/1405. He worked as a machine fitter. In 1933 and 1934 he underwent pilot training at the West Bohemian Aeroclub. He also continued his training in 1938 at the Air Force Regiment 1. He went abroad as a married man and father of two children. On 2 October 1939, he was presented in France as an aviation mechanic. In the UK he completed pilot training and became a member of the No. 311 (Czechoslovak) Squadron. He began to fly operationally on 15 May 1941. He died together with Jan Miklošek, Mojmír Sedláček, Antonín Zimmer, Zdeněk Babíček and Alois Jarnot on 15 September 1941 in a raid on Hamburg. The entire crew was buried at Lingen cemetery. After the war, their bodies were transferred to Reichswald cemetery. Vilém Soukup flew 21 raids before his death, of which 4 as flight commander.

He was born on 6 August 1918 to František Zářecký, the station master, and Anna Zuzana, (maiden name Ertlová), on Slévárenská Street 1464 in Pilsen. He completed vocational training as a mechanic. He was a member of the West Bohemian Aeroclub, but before the war he managed to go on only a few school flights. In France he spent some time in the Foreign Legion, like his colleagues, when he was enlisted in the Agde Air group. After the fall of France he sailed to the United Kingdom. In July 1940, he was taken into the RAF and subsequently relocated as a mechanic to the No. 310 squadron. After two years he left for pilot training and on 6 June1944 he became a pilot at the No. 312 (Czechoslovak) fighter squadron. He was released from military service on 2 March 1946. Three years later, he and his wife and son returned to Great Britain, and he himself to the RAF. He died in a plane crash on 5 March 1957 as a member of the No. 53 squadron. 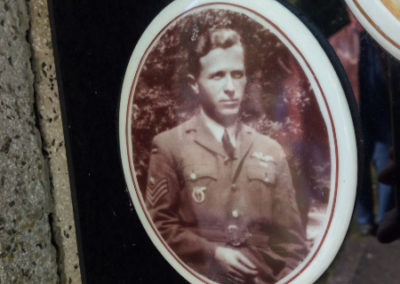 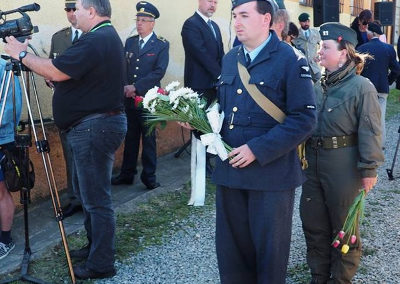 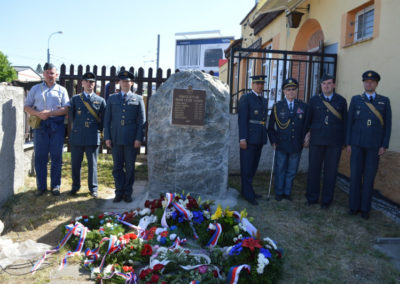 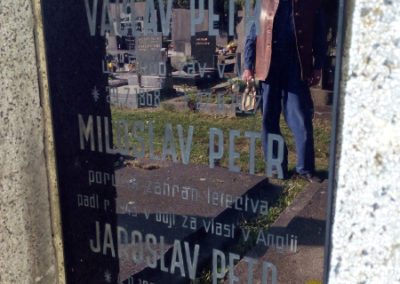 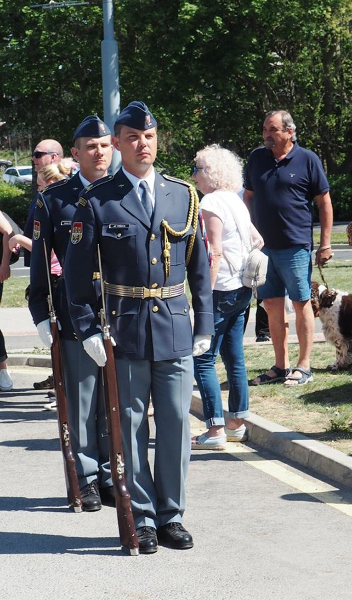 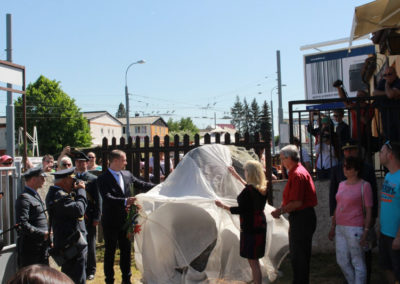 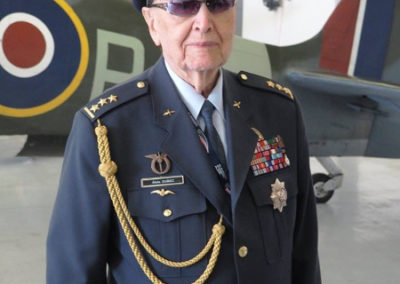 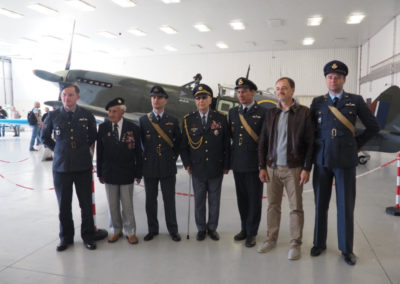 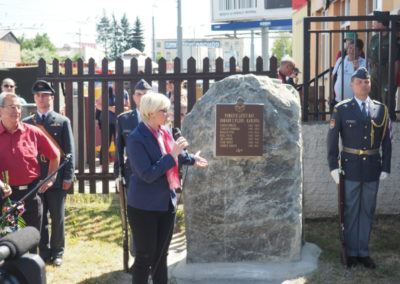 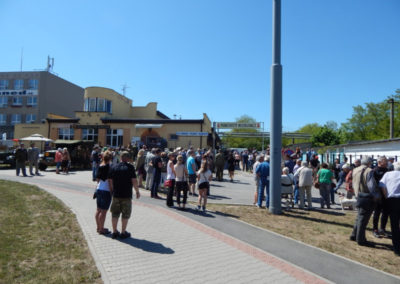 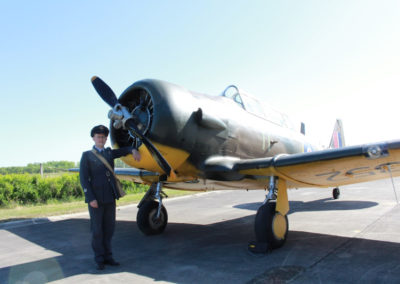 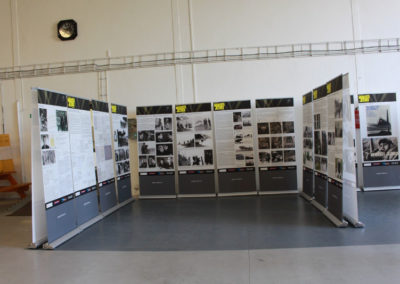 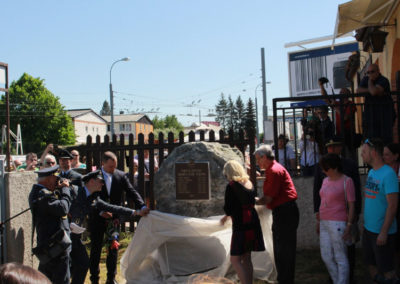 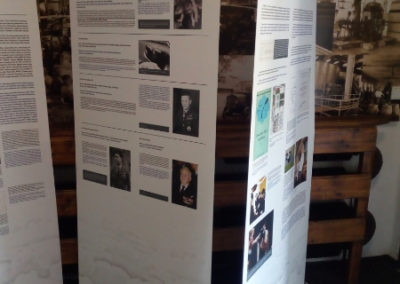 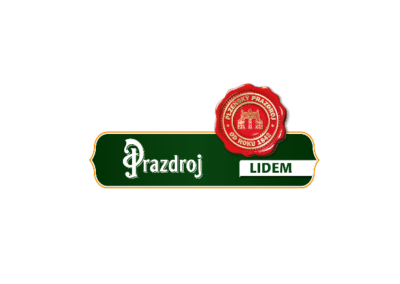